This week as my last open and honest blog mentioned we were in GOSH.

We weren’t expecting to have to stay up there for a night let alone 2 and thought it would just be one very long day of testing like before.

We got there and knew that BBG was going to be put under general anaesthetic (GA) for a MRI. Although it wasn’t an operation the nerves were still very much there. We were warned by the Doctor that as no one is sure what condition BBG has, there were a few extra risks to being under a GA. There are muscle conditions that when under a gas GA can cause the person to go to intensive care, this mixed with BBGs kidney problems could lead to quite a bad reaction. We were told she couldn’t be sedated as that was higher risk of serious complications and even with the risk of intensive care this was the best way to go. We had no idea what would happen after what should be a easy routine MRI under GA.

BBG was also Nil by mouth and so for a while she was screaming in hunger. As I breastfeed I couldn’t hold her or comfort her as that would be cruel, so Dad held her the whole time. He did a perfect job, but it didn’t make me have any less mum guilt seeing her hungry and not being able to feed her. 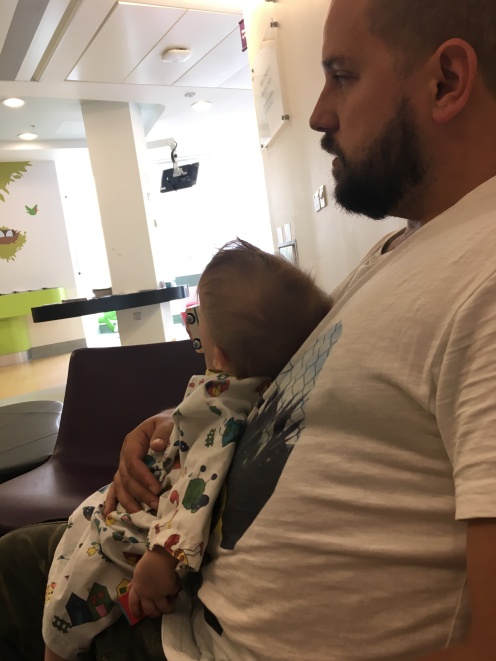 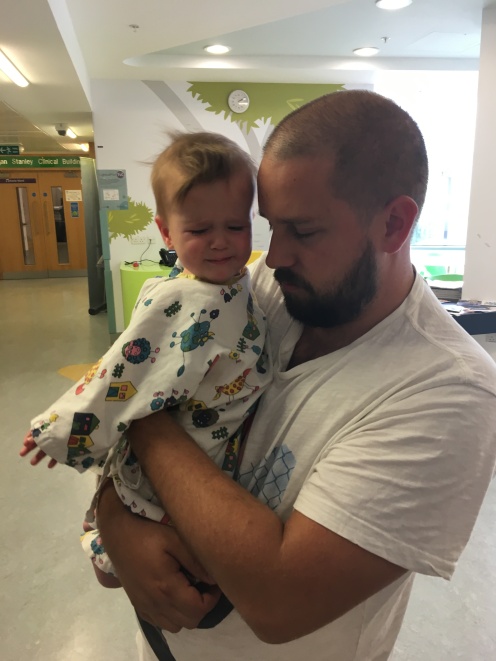 She went down to the MRI and although it wasn’t an operation knowing that there was potential for the next time of seeing her being in intensive care, made for an anxious time.

We decided to do what a lot of British people do and go and find some tea, as tea solves a lot of problems. In the cafeteria there is the GOSH shop and on a long day of appointments we have vowed to get BBG something from there. I spotted a Peter Rabbit with the GOSH symbol on his pocket and knew that was exactly what I needed to give her. As soon as she saw it later in the day she gave it a massive hug. 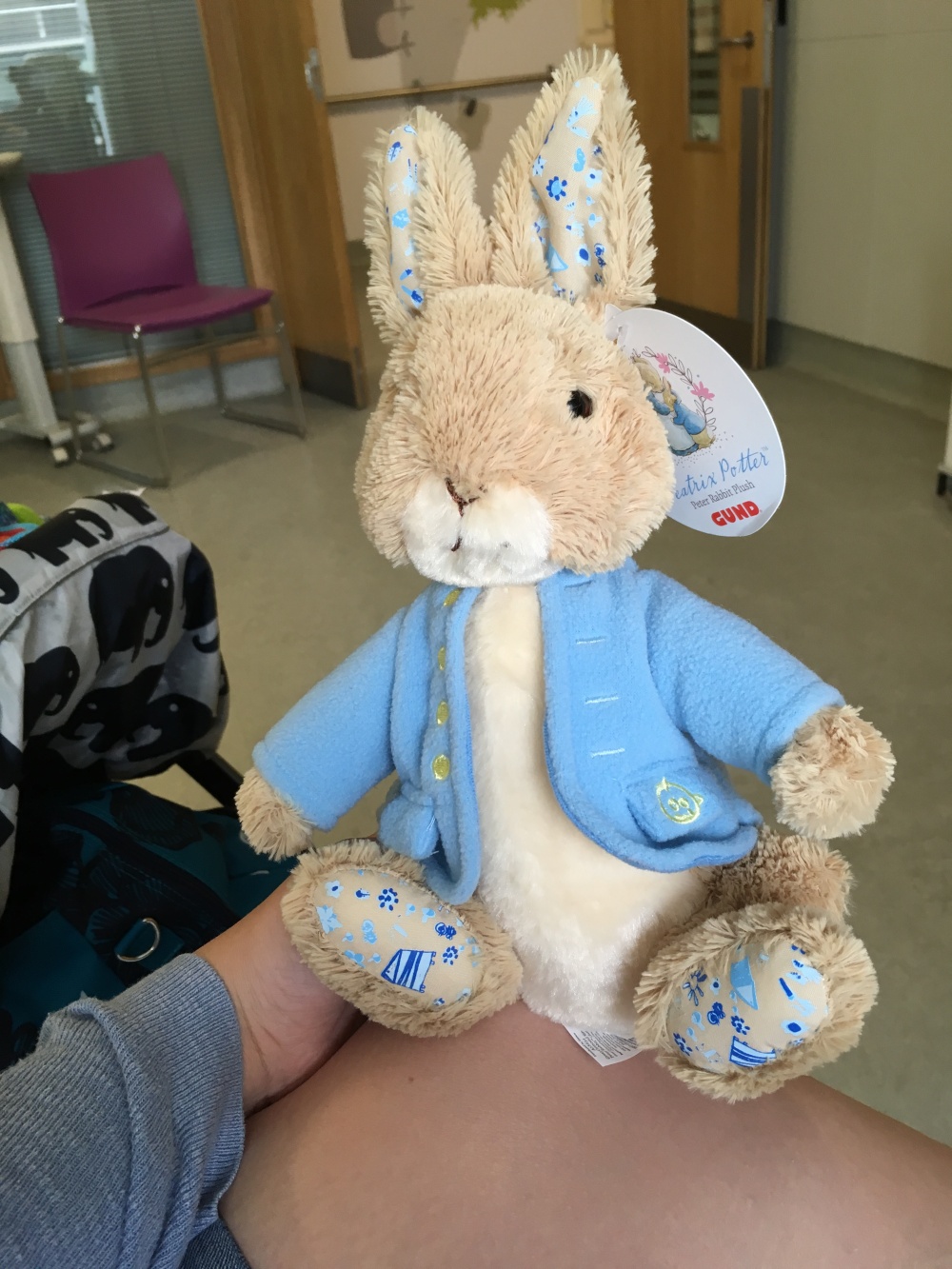 We had a private room for our stay and so we went to sit back in the room and wait to be told to come down to recovery. 30 minutes after we were meant to go down we finally got the call and we went to cuddle and feed our baby girl.

Due to her unknown muscle problem she did need to be strictly monitored for 6 hours.

One of the scariest moments of our time there, was when BBG did what she did a month or so ago. Her eyes glazed over, she became weak, all colour went from her face and she was unresponsive. I was calling her name as the machines went from a general alarm to a SHE NEEDS HELP alarm. Her pulse was 276 and her oxygen stats had dropped to 53%. She quickly regained consciousness and her stats went up to normal. They don’t know what happened.

Through the night the alarms kept going off as her pulse was irregular. Her oxygen kept dropping too. It was not a nice night and I have never slept so badly in all my life. I am just so glad we were in a private room as I was a bag of nerves and pacing like a lion at the zoo.

During the stay we also had a repeat of the EMG, this is where they send mini electrical shocks to the nerves to see what happens. One of the shocks goes onto a nerve that does gross movement, and I was warned that her foot would jump… well no jump ever came. She then went onto the next part of the test, which is the part which I hate the most. They put a needle into the muscle of the leg and somehow listen to the muscle? I am no medical person but somehow they can hear certain conditions within the muscle. Once this was done we were back on the ward and waiting for the next test.

Speech and Language Therapist (SALT) came up to see us, they see us every visit to GOSH. She is concerned that BBG has started to cough and choke on her breast milk. She hasn’t done this since she was a newborn. They listened to me feeding her, (no, this never stops being weird, having someone with a stethoscope to your babies throat while you are breast feeding), and suddenly got me to stop. Although on the outside BBG looked fine, on the inside she was struggling and was about to choke. SALT are unsure why this is suddenly happening and are concerned.

Last time we were up at GOSH we were told to start adding really powered up biscuit into BBG’s puree, little by little, to get BBG used to different textures in her mouth. We practised this while SALT were there and still BBG refused to have anything to do with this textured puree. We then did some food play therapy to get her used to textured food on her hand. She did really well with this, however she still won’t put her fingers in her mouth to lick off the food so this is the next stage we want her to get to. She still is also not drinking from a beaker.

One exercise we have been told to do is put a dissolving crisp into her hand to play with and we started doing this today. Well we gave her a crisp to try to eat and although it didn’t go into her mouth she did love waving it around.

The doctors came in as the SALT team were writing up their notes and I thought, although she hasn’t progressed she was doing ok, however SALT are concerned and made sure the doctors really knew how concerned they were.

Due to BBGs heart rate being so up and down we were also given a monitor for her to wear for 24 hours while at home. This will then record onto a little black box and be sent back to GOSH for analysis.

We were meant to see other departments and have other tests but suddenly we didn’t need to. We aren’t sure why this is but after the days we were  up there we are just glad to be home as BBG and us parents were getting very restless.

Even if these tests come back as negative to everything, we can at least rule out some conditions.

I am still anxious about the fact that physically on the outside BBG seems to be improving, however on the inside she isn’t doing so well. Her throat muscles were already regressing, but in the few weeks from the last time of seeing the SALT team and now, they have regressed a lot more and this is scary. Her kidneys are still showing signs of failing and we will be doing more tests to see the extent and to see the next steps for this over the coming appointments. Now her heart is being looked into, I am hoping her heart is fine and it is just a reaction to the GA but if it is not then her heart muscles are also being affected.

The life of a Syndrome Without A Name (SWAN) child is so hard. I am exhausted after our hospital stay, emotionally and physically. I am exhausted with the constant not knowing. I am anxious of what will happen in the future, I am anxious about what is happening to my baby and I am anxious about getting a diagnosis. Will a diagnosis help me… Probably, so that I know how to help her, probably, so I know what to expect in the future and hopefully knowing a prognosis I can stop worrying that my baby girl is slowly being taken away from me.